We left Porto in long thick sweater and pants – the second we got off the airplane, you could feel the change in weather. 17 degrees, and sunny! After getting our bags and car rental and head outside, the first thing you see if the ocean! How cool was that! You see one road, and only water! I couldn’t wait to get down to it! After a forty-five minute drive, extremely narrow and scary roads, we made it to our chalet. This chalet was spectacular – outside was the best part. You literally overlook the ocean – you can see the waves, whether big or small. It was amazing to see! We left our bags inside and went to search for a grocery store in town. It was barely a five minute drive – all the way down the mountain of course. Literally along the beach. You shop, and then walk along the beach. First thing you see is wine bottles called “Madeira Wine”. I’d never heard of it before, so I figured it was worth a try. I didn’t realize that Madeira Wine was actually a big deal – all over the rest of the world! This day was quick, but we were ready to start our adventure the next morning!

We started our morning in our little town of Calheta, back along the beach. We made an appointment to go dolphin/whale watching, and fishing at the same time. Cost more than we wanted to spend, but to be able to do fishing and animal watching at the same time, we were happy. We had a few hours to kill, so we went and “chilled” along the beach first. Kids enjoyed making “sand angels”, and making sand castles. John took pictures, and I wet my feet in the ocean! After a winter of rain and cold, the water and the sand was amazing! I truly didn’t want to leave.

We found lunch at a cute little restaurant where we sat on the terrace. I read about a Madeira specialty drink called Poncha. When I saw a glass on the menu for only 2euros, I decided to try a glass. It was Gin based, which I didn’t realize. It was orange juice, gin, honey, and lemon juice. First sip was a shocker with how strong it was! Of course I finished the glass, but told myself I would be trying the rum based next time.

Next on to the boat. We had a private boat. The kids were tired and actually fell asleep on the boat! How crazy is that lol The views of the island from the boat were beautiful. You could see the coast in a way you never could unless in the ocean a boat. The fishing rods were set up behind the boat, and we all got to sit at the front. After about 2 hours and not catching or seeing anything, one of the lines started to move as if it had a bite. We all got excited to see how big a fish we caught, but it turned out it was two lines got caught together. Another hour and a half goes by, no luck on seeing or catching anything. As we start to head back to the marina, one line started moving again. Excited again, but turns out it was nothing was a lizard fish – not a fish we could keep, so it had to be thrown back in. Here we are, four hours later, sitting in the marina, not having seen any dolphin or whale, and not having caught any kind of good fish. I guess that’s the “joy” of fishing right, the not knowing if you catch something or not… Oh well…

Back to the hotel we went, supper, glasses of wine, and early bed. Who knew after such a dark boring winter, the sun could be so exhausting!

On the island, you are never quite sure what the weather I going to be. This morning it was 12degrees and cloudy, but weather showed on the other side was sunny and 16. So we decided to go to the Porto Moniz Lava Pools. They are a natural pool formed by volcanic lava – filled naturally from the sea water. The rocks around the area are real volcanic rock. When you show up there is a sign on the wall saying what temperature the water is at. Today it was 16degrees. The boys were free to enter, John and I were each 1.50euro. Definitely worth the expense for this experience. We all changed into bathing suits and decided to test the waters. Boys being young boys decided to run right in and not have a care with how cold it was. They were wet from head to toe in a matter of seconds. I on the other hand, took about 5 minutes just to get in past my ankles – water was definitely chilly. Even though the kids were wet, they got cold very quickly – they changed back into their clothes and decided to play instead. Me though, I wanted to get in as far as I could, just to say I did. After about 30 minutes I was able to get in up to my waist. Once in and used to the water, I didn’t want to get out.  I just stood in the water, staring out into the ocean, watching the waves the rocks around me. It felt surreal that I was actually there. Eventually a huge wave crashed over the side and got me wet almost to my neck – that was when I decided to get out. I didn’t want to leave, but it WAS getting chilly. 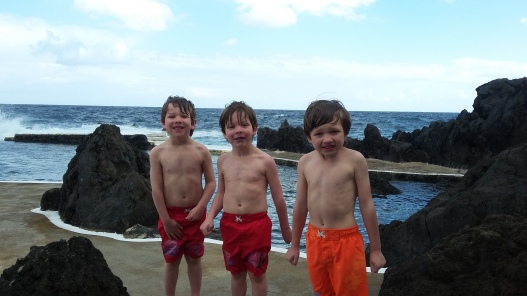 Next we decided to head for a hike. I found a “moderate” hiking path that I thought would still be fine for the boys. Turns out my fear of heights got the best of me! Don’t get me wrong, the entire hike was absolutely beautiful! I would do it again, but not a moderate unless the kids are older. You have about a foot and a half to walk, a two foot little stream on the opposite side, and the other side is probably a 1000ft drop! Sometimes on the side of the “drop” there is more room, but for the most part, the hike was scary! Best part (for John and I) was a half a kilometer of the hike through a pitch black tunnel. Trying to hold two kids’ hands, walk, and having John avoid hitting his head was not easy. The best part of this for us was at the end of the tunnel you come out to a beautiful waterfall. There is enough room to walk directly under the falls themselves. It was simply stunning. At this point we had already walked almost 5km, and weren’t even at the end. Since the hike didn’t circle back to starting point, we decided to turn around. Finally we reached our car and drove the hour back through the mountain to our hotel and once again, we all slept very well!! 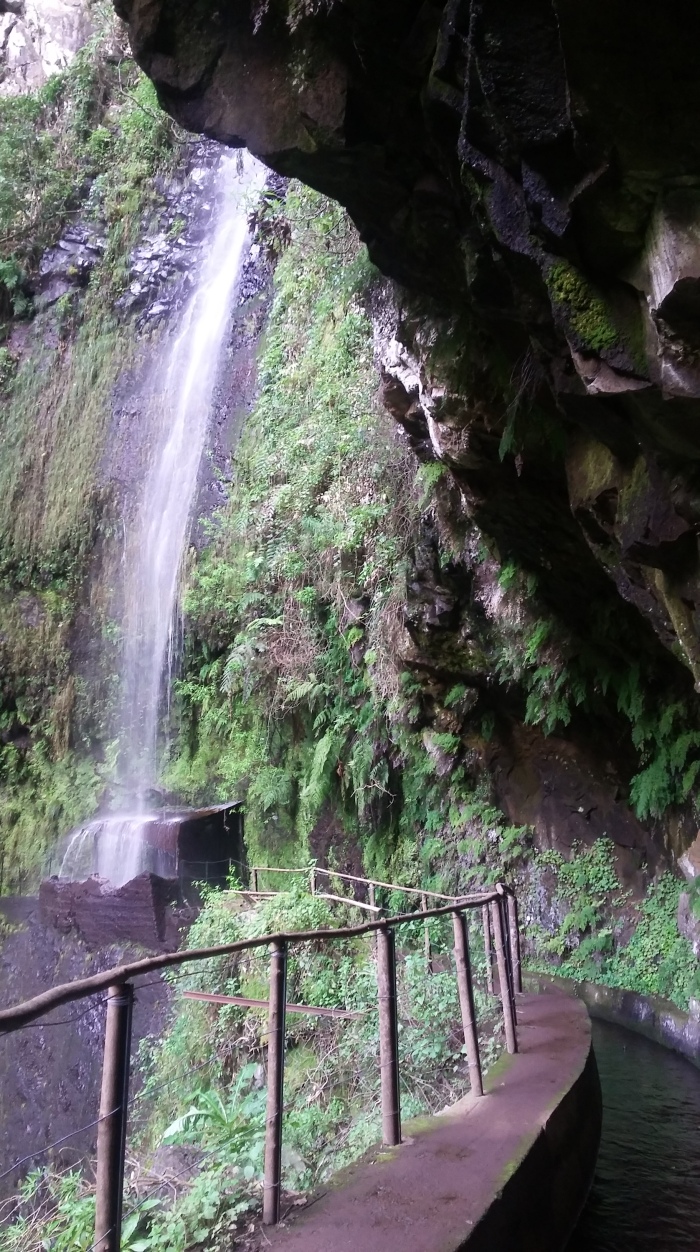 Today we decided to go visit the main city on the island, called Funchal. We parked underground near the marina, so we decided to see what the marina had to offer. John and I had gone back and forth since our first boat trip deciding if we wanted another chance to see dolphins or whales. John wanted to, I was really on the edge – unless the price was right! Well turn out, a price was right. John and I full price, Nathan half, and twins free – plus a guaranty that if we didn’t see anything, we’d get a second trip out (that was a deal breaker for me!). The boat was a catamaran, so John and I and the kids kept switching who would be sitting on the net in the front. Tyler loved the net, Zachary and Nathan not so much. I laid back and enjoyed. I was still stressed about not seeing anything, until 15 minutes in, we saw something! Kids were so excited! The dolphins kept swimming in and out of the water all around the boat. After about a half an hour with these dolphins we went up the ocean a bit and once again found another type of dolphin. These ones seemed much happier to be around the boats, came very close. They kept swimming back and forth, jumping in and out right next to us. On the way back to the shore it was getting much chillier, and the bigger waves started. I found out the hard way by continuing to sit on the netting and telling myself “I’d be fine”. No way… I got soaked! This continued the entire way back to the marina. Waves eventually got all of us on the boat (John and I and one other girl) soaked head to toe. Kids avoided it by hiding behind me and getting me wet instead. But at the end of the 3 hours, the boys were happy with lots of dolphin stories to tell! 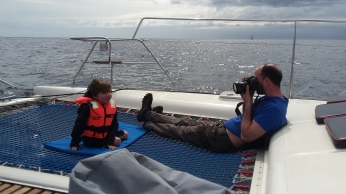 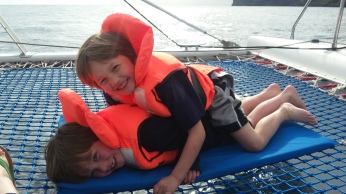