Today our main event was the Sao Vicente Caves and Volcano center. I don’t remember the price, but the tour was a lot of fun! It was 750m of lava caves from a volcano which erupted 890thousand years ago! It has walking paths inside and is very well lit so you know exactly where you are going. Once you get out of the caves you watch a small video which explain that Madeira was made from a volcanic eruption which made three different islands – we did not know that before so it was definitely informative! Worth a visit for sure!

Next we decided to go to a small city called Santana, known for its straw houses (which people still live in today!). GPS ended up bringing us to a small “theme park”. We were going to turn around and leave when we saw it was 1euro to just enter to walk around; kids were free. It was a place where the kids could just run and not care – which was nice, and what they needed. Everything inside the area was “overgrown”. It had a giant fish, a giant banana, a chair, shoe, hat, toboggan, even a giant bottle of wine! Playground at the end with the fastest slide I think I have ever been on! Very worth the 2euros to get in here! 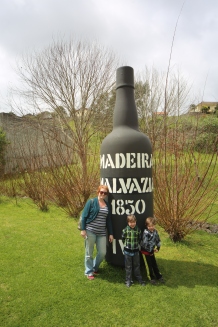 Last place of the day was the Casa do Rum (Rum House). This factory only operates for about two-three months out of the year, but is open year round to visitors, and is free entrance. This is the only operating mill in all of Europe which still uses steam engines to mix the ingredients. Once you are done there, they have a store which you can buy the rum made on the property. John bought a bottle of rum which only had 3000 bottles done of it. He doesn’t quite know whether he wants to actually open it, or leave it as a “collector’s item”. Well worth the extra twenty minute drive to there.

Since we only really had time for the dolphin watching in Funchal, we decided to head back there today and see what we didn’t have time for the other day. The main thing I really wanted to visit was a Madeira wine brewery. As we were walking the other day we found Blandy’s – which is where we ended up today. It is the oldest brewery on the island. The tour was only 5.90euros, which included tastings, but since it was Easter, they even had an “Easter hunt” at the end – kids were already excited hearing about that (made them listen too hehe). They started at showing us the barrels they use to keep the wine in, and the types of grapes used to make the wine. Most wine cellars are in the basement to be kept “chilly”, but Madeira wine is always kept in attics instead. Unless the grapes do not have 9% of sugar in them, the grapes are refused and cannot be used. Not something I would have known beforehand, so it was very interesting. Next we go into the museum room where they have all the old items they used to make and transport the grapes from the grape fields to the brewery itself. This is where the Easter Hunt took place. The kids each found a chocolate egg (I think everyone else on the tour left them for the kids to find as there were only three chocolate eggs found – which was very nice!!). From there, the tasting! Each kid was given a gift of a Blandy’s coloring book, and crayons. We later found in the gift shop the crayons were 1.99euro and the coloring book was 2.99euro, so given our tour was 5.90, it’s like our tour ended up being free. The tastings were very good, and since John didn’t like them, I had four tastings myself. Gotta remember, Madeira wine is 18%. We found out they ship, so we had some bottles shipped back home. Outside they had some barrels to take pics and “play” with. Kids loved them. This tour was 100% worth it! I would go back again!

The rest of the day we walked around the beautiful gardens and the lakes around them. I love seeing all the different trees and plants and animals (mostly lizards…) all over the gardens.

One of the most shocking thing we saw was a family wearing jeans and a WINTER jacket! It was 18degrees and the kids and I were wearing shorts and all of us in t-shirts!

At this point we had done almost everything on the island we wanted to, so we wanted a more “relaxing” day. We went to the third highest peak on the island. We would have loved to go to the highest, but you can only get there by hiking from the third highest – Pico do Arieiro. The drive up was beautiful, but scary – for me at least lol  By the time you are not even at the top, you are already above the clouds; it was amazing to see! The top was cold! Thank goodness the kid had sweaters and pants – I had a thin sweater and a skirt! The view was amazing! Of course, once again, being so high and my kids being fearless I kept getting a little panicked, but they loved it – I think they tease me on purpose! lol  After a little bit of walking around, we went into the small café and the kids and John had ice cream, and I had a glass of Poncha.

From there we went onto the best beach on the island. It is actual sand, not rocky. It was called Machico. Kids made sand castles, running in and out of the water, John and I enjoyed getting in the water up to our knees. Today was a relaxing day, but it really was the PERFECT way to end the last day of our vacation!!