First stop our next morning was a very small town called Alsfeld. It was cloudy and on the verge on rain, so we weren’t sure how long we would have before heading to our second town; we had a lot to do today so quick visits and leave. The Alsfeld town hall was something amazing to see. It literally takes over the entire town square. Look at the picture below and you’ll see what I mean. I don’t think I’ve seen a town hall like it before. We tried to find the Fairy Tale House which was a two minute walk away. It is a small museum of  fairy tale rooms and characters inside. The outside literally has Rapunzel’s hair hanging out the window. I would have loved to go inside, but it was closed. If I read correctly, it’s someone’s “hobby home” so it’s not their first job to have the house open – so it’s really only open when they are available.  The hours are funky. It was also 9:30 on a Sunday morning when we went, so i didn’t really blame it for not being open. Still really nice to see. May go back if we are in the area. 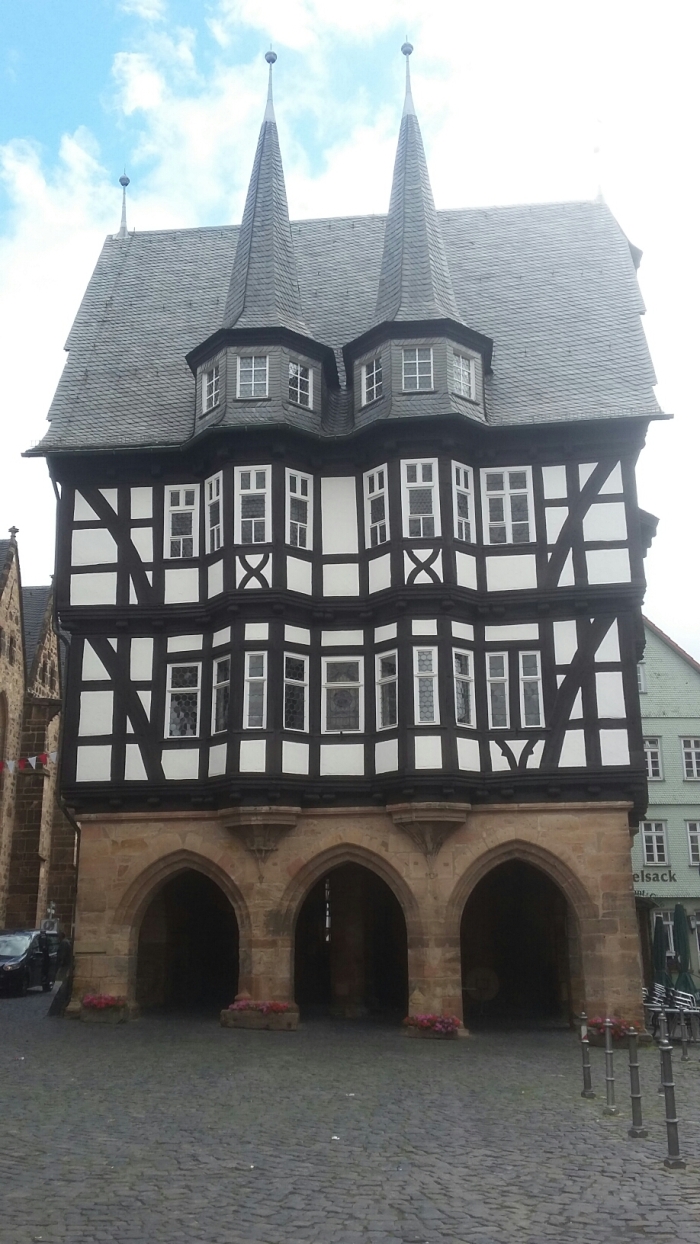 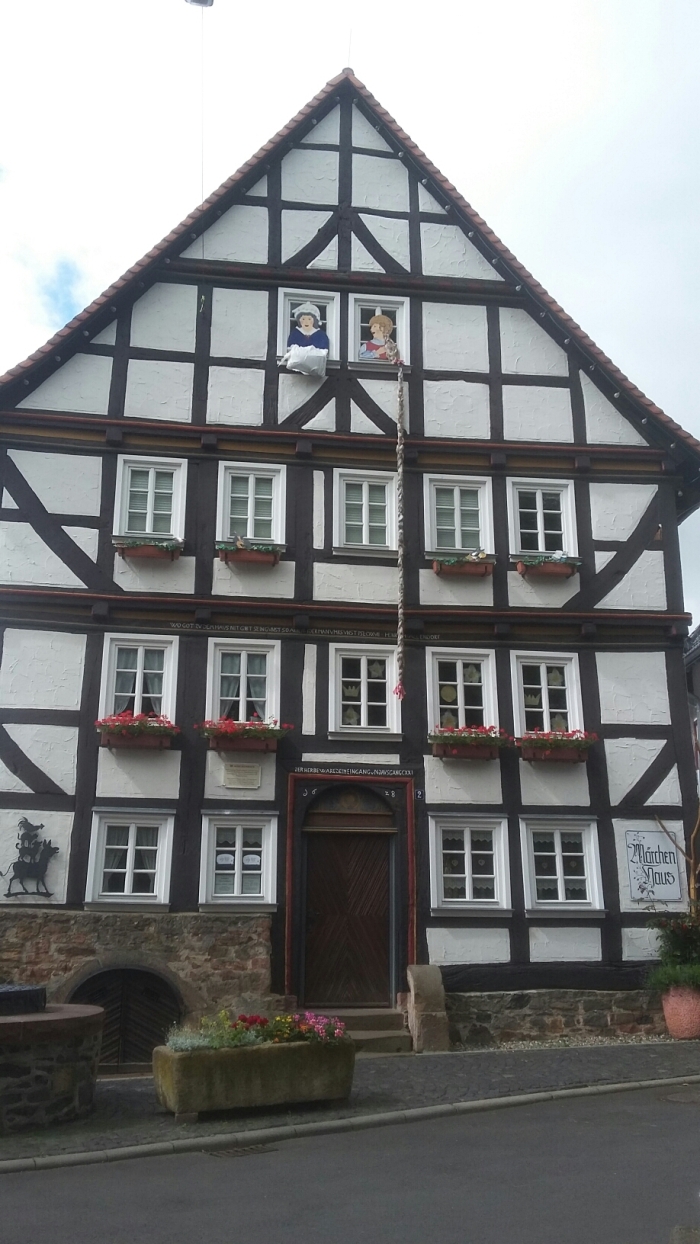 Next stop Marburg – where the Grimm Brother’s went to university.  The drive to get from Alsfeld to Marburg was beautiful. Once you get close to the town, all you see in the distance am is the castle, and church towers. It really was nice to see. We got into the town and found a cheap parking spot near the church so we wouldn’t be there long and less walk to get everywhere – then we would just need to drive to the castle and head to our next town. Simple right?!? Boy were we ever wrong! We ended up spending the rest of our day here and having no time for any other planned city.

First are the steps to get up to see the church. The church is huge. There were a lot of stairs – or so we thought. We saw three old looking vintage chairs, so boys wanted pics of course. We turn around and see three desk style chairs (like from grade one) so we needed pics there also! We keep walking around and end up in a beautiful town square. Looks almost like out of a movie. It was beautiful. Cobblestones, fountains, half timbered buildings everywhere. I see a sign that says “castle this way”, so we followed. John bugged me because from the road the castle looks almost impossible to get to from walking, and here we were following the path to get to it… The steps to get there though we’re kind of insane – just when you think they ended, there are more! Finally when you get to the top of the stairs to the castle, first thing you see is a giant red high heeled shoe – right out of one of the Grimm Brother’s stories. 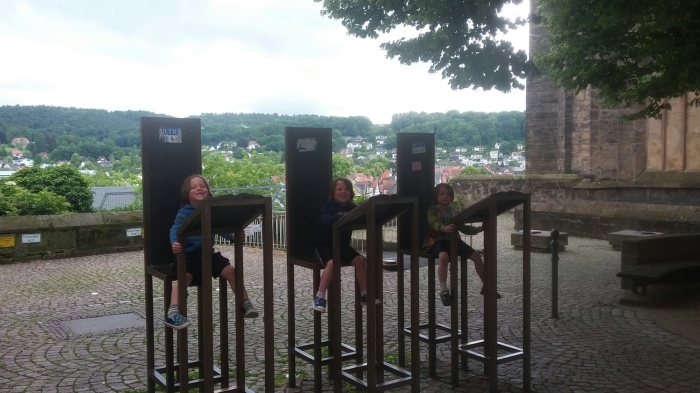 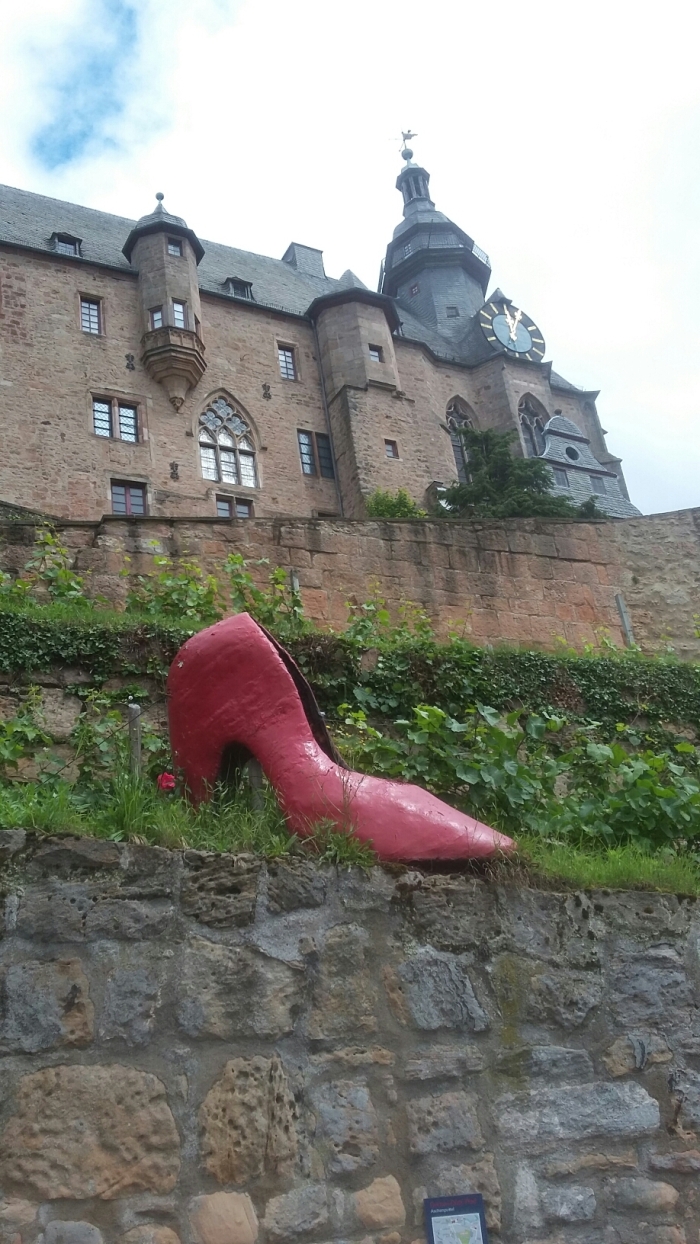 We walked around the castle and when we went inside to buy a magnet for me, we saw a postcard woth different figurines on it – we asked where it was. Instead of telling us, we got a map, and were told to follow the map on a scavenger hunt to find the Fairy Tale clues incorporated into the city. Seriously, how awesome is that?!?! There were 16 areas to find. Most were around the area we were in, a couple were a little further. Ended up taking us about 2hrs to finish the entire map. You pass the Grimm Brother’s home where they lived while they went to school. The giant high heel was one clue. Another was in the Botanical Gardens around the small pond. The boys’ favorite ended up being a Hansel and Gretel park. Everything in it had to do from fairy tales, but mostly Hansel and Gretel. Along the walk we found two huge beautiful churches. Kids loved finding the clues as we only saw a dot on a map, didn’t know what exactly we were looking for. It was exciting! 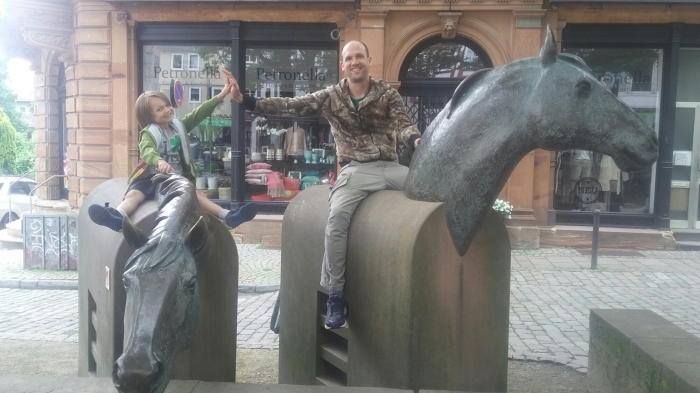 While we were walking, across the distance we saw a tower that looked like something out of a Disney movie, so we found the address and headed over (only 10 mins away). We were able to get to the tower balcony portion, and it makes you feel like a princess. 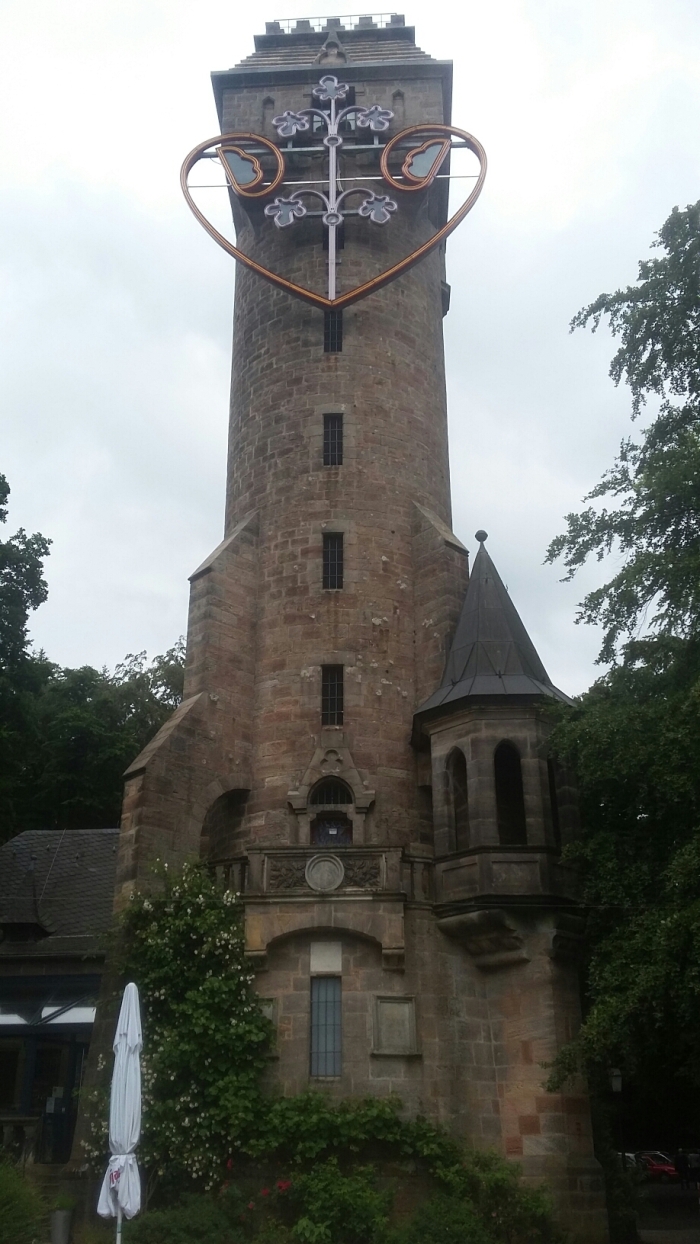 We had such a great first weekend on our Fairy tale route! There is so much more to see and do and we cannot wait to head back out and discover more!!!!