I had a full day in Brussels with the three boys’, so I decided that instead of just walking around aimlessly, we would find something fun to do. After speaking to a friend of mine, I decided on Mini Europe. Mini Europe is a theme park divided into European countries. In each of the countries, are some of the main attractions to see (i.e. Eiffel Tower, Leaning Tower of Pisa…etc), on a 1 to 25 scale of the real thing.

After dropping our backpack off at the car, we walked to Central Station, and found out the way to get to the Mini Europe metro station. The kids were all free, and my metro tickets (one there, one back) were only 4.20€. Took two metros, and about twenty minutes, and we were at the Bruparck. Bruparck is where Mini Europe, the Oceade, Kinepolis, and The Mini Village are. Atomium is also in the same area, walking distance away. 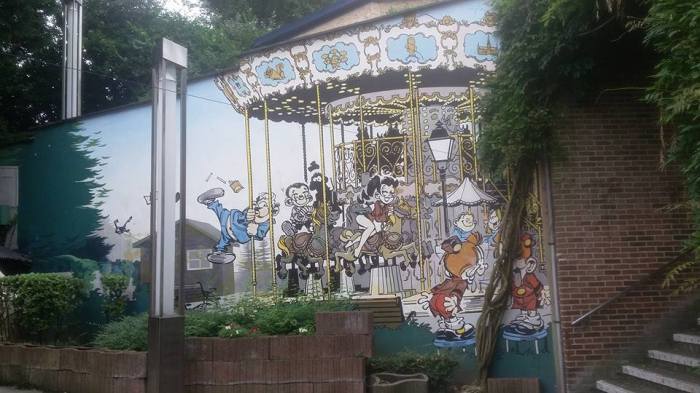 We got to the area early, and since there is a big park in front, we were able to play before Mini Europe opens – which was nice, no boredom, and no kids running around like crazies. When it finally opened, we went to pay, and kids under 1m20cm are free – so it was very nice to have the three kids not pay for entrance! My ticket for Mini Europe alone would have been 15€, but I bought the joint ticket for the Atonium also, which was 24.50€ instead.

As soon as you walk into Mini Europe, you are stopped by the mascot and someone taking a picture of the group you’re with. You have the option of buying the photo(s) taken at the end of your visit.

First area you get to is Copenhagen in Denmark. One of Nathan’s very close friends in school is from Denmark, so Denmark to him is a very big deal. Also, since we went to Copenhagen last February, Denmark is very exicting to us! The kids recognized the Nyhavn, and loved seeing the colourful buildings. Other favorites were seeing Kasteel Hoensbroek (twenty minutes from our home), Amsterdam, the Eiffel Tower, Arc du Triomphe, Sacre Coeur, the Plaza de Toros in Seville, Spain, and Burg Eltz. The excitement of seeing places they knew and recognized was absolutely beautiful to see. To see the look on their faces when I told them that the volcano they just saw “blow” in front of us (Mount Vesuvius) we would be climbing when we went to Italy was total fascination.

Seeing and learning about all the cities we have been to, and ones we have in plans to go to was ton of fun! We stopped at the retaurant on the way out and had fries since we were all starving. Last stop before leaving was the photo booth of your picture at the beginning. I’d told myself the entire time I was NOT going to get the picture, it would be fine. Turns out, the picture was an amazing shot of the kids and me, so for 7€ I got a great pic – one I wouldn’t have gotten if it wasn’t for them!

Next stop, Atomium. The Atomium was originally made for Expo 58, now a museum. It is 335ft tall, and consists of nine stainless steele clad spheres connected by tubes so that the entire unit together looks like a cell. Each sphere is 60ft in diameter. We saw this on the metro heading there, and the kids had been begging to go inside ever since. Now that we were here, they were so excited. Since I bought my ticket at Mini Europe, we bypassed the line to get in, but still had to pass through a small security. Again, as soon as you get inside, someone is standing there ready to take your picture with the European comic book charachter, Spirou; which you can buy at the end of course. I can honestly say, the entire museum was kinda boring. We got through the entire thing in about thirty minutes. The best part were the trippy escalators (there were signs saying people who have seizures should not go in). There are lights that flash non-stop. Kids were a little scared at first, but ended up really enjoying it! 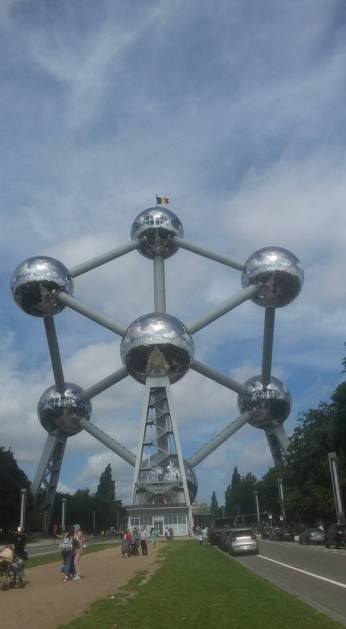 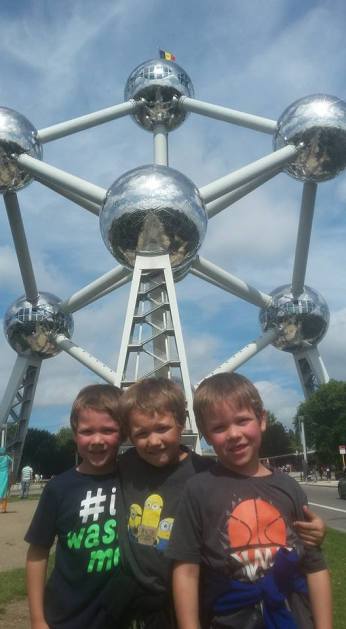 At this point the kids and I hadn’t stopped moving for hours, so we decided to rest and lay on the grass staring up at the Atomium, which was actually really nice. It was beautiful, and very relaxing to be sitting quietly together. After this we headed back to the metro to go back to downtown Brussels, to meet a friendly face from “home” (Canada), and check out the Flower Carpet from the top view!!! 😀