Croatia has a lot of National Parks. When researching where to go on our trip, Krka Waterfalls kept popping up. When seeing how beautiful the waterfall is,it made me want to go. What made it even better is when I saw that you can actually swim in front of the waterfall – how amazing is that?!?! This National Park was becoming more and more of a must-do for me.

Walking around our local German grocery store, they have flyers for cruises and flights…etc  Zachary grabbed a book to look at. While looking through he found a picture and said “mom, look how cool this waterfall is!”. I didn’t say much, but once I realized exactly what he was looking at, I got the best reaction out of him. “Zachary, when we go to Croatia next week, we are going there! Know what’s even cooler?! We get to swim in front of it!”. I should have been recording this interaction. The look on his face was total amazement. I had a lot planned for the kids over the next 9 days (stuff they would enjoy) but for him to think we were going because HE found it, was even more exciting!

Sunday morning we wake up and see how beautiful the weather is. Perfect day for swimming, so into our bathing suits we went, and into the car. A friend I work with told me about how to get to the waterfalls. You don’t go to the main entrance of the National Park, you go to a small town called Skradin and get on a boat from there, which brings you to the park. Good thing he told me about his mistake, because we would have done the same thing. Parking spot found quickly, and off to the boat. Tickets were 110kuna  (about 14€) an adult, and the kids were all free – the 110kuna included entrance to the waterfalls though. Boat leaves every hour, so we had about 30 mins to kill to walk around. I spent almost the entire time looking for sunscreen, which didn’t happen.. Burnt on the first day was bound to happen again for this redhead.

Boat ride is about 30 minutes, but it’s beautiful. You see swans in the water (kids love swans!), and all the trees around the canal – really was nice to see. When you get close you can literally hear the waterfall, which makes excitement come on even stronger – you should have seen the three kids’ faces!

Walk about 5 minutes when you see the waterfall from afar. Absolutely breathtaking. Words cannot describe FINALLY seeing this after months of research! Thank goodness we decided to come when it was sunny out, and not when it was cloudy. The colours were almost sparkling; they stood out so much. I could have stood around and listened to it all day. There was no one swimming yet, and although the kids were dying to get into the water, we decided to explore first, and swim later. There is a bridge to cross over where you can take pictures in front of the falls. You keep crossing and you end up kind of beside the falls, with stairs making your way up. For people not used to wearing flip flops, actual shoes probably would be a smart idea here – me, who wears flip flops all the time, I had no trouble (but was getting funny looks from others).

The stairs bring you to beside the waterfalls, then another set of stairs brings you even higher up. You can see everything from above – again, absolutely beautiful. More stairs bring you higher again, which brings you to some souvenir shops. We almost started heading back down the same way we came when I saw a sign saying “walking path starts here”, so we followed it. I’m so happy I found this! The walking path brings you past ponds with the clearest of water with fish swimming in it. Walking through the woods with all the wild flowers was something to see. They had warnings about seeing all kinds of dangerous snakes (none were seen thankfully), but we did see a chipmunk! The path brings you to the opposite side of the waterfall, but still high up. Stairs bring you down, and right next to where we saw people swimming – yey!

Off went shirts (for the males ;))  and into the water we went. Thank god we were warned about bringing water shoes,  and not go barefoot. The water is clear and you can literally see fish swimming around your feet – amazing! The kids kind of had moments of freaking out because of the fish, so John and I carried them to a small tree area where the kids could stand in grass. John and I took turns going out into the water to experience it (and take our pictures) while the kids played. We took a picture of the kids as well of course, then decided since they didn’t want to get into the water themselves, to head back to the boat to get going. We’d been here for about three hours, and no matter how much fun we were having, we had to make sure we caught the boat back so we weren’t stranded and forced to walk back… Since the kids again didn’t want to get into the water alone with the fish, I decided to jump down and start to carry one kid at a time. Well, if you follow me on Facebook, we all know this is where I slipped off a very slippery rock, and got my right foot wedged between two rocks in the water, and sprained my ankle. We didn’t realize how bad it was at this point though, it just kinda hurt. I stayed in the cold water which felt really good and just took in the moment. I was standing in a waterfall pool swimming, in one of the most beautiful places I have ever been! I really didn’t want to leave! Eventually I could hear the kids arguing in the background, so I got out and got us all ready to go.

We had just missed the boat by five minutes, so we ate crepes and on our way we went. Boat ride back was quiet but I was starting to feel my ankle a little more. By the time we got off the boat we were starving, so we found a cheap restaurant to eat in before heading off. We found a new Croatian drink for the kids called Cedevita. Comes in two flavours (orange and lemon) and is kind of like Kool-Aid. You get a glass of water, with a pouch of either orange or lemon flavour, and you mix it together. Not sure if it’s healthier than Coke or not, but the kids enjoyed it, plus it’s cheaper than a soft drink! I tried a new beer, and John tried the lemonade (very sour…).

Since it was only about  4:00, I heard of another very cute town called Primosten, so we decided to check it our just before heading to our hotel. Parking was free, and right along the water. I was definitely feeling my ankle at this point, but still wanted to make sure I saw this town! Walking along the beach with souvenir shops is what we enjoy – plus it was sunset time, so it was even more beautiful. The boys walked along the beach trying to “catch the waves” with Daddy, while I walked on the boardwalk area on flat ground. Seeing the sun go down was something to see – I’m very glad we got to Primosten just in time! John and the boys walked in the city walls while I enjoyed sitting in the square. By now, an hour had passed, and I was ready to leave. 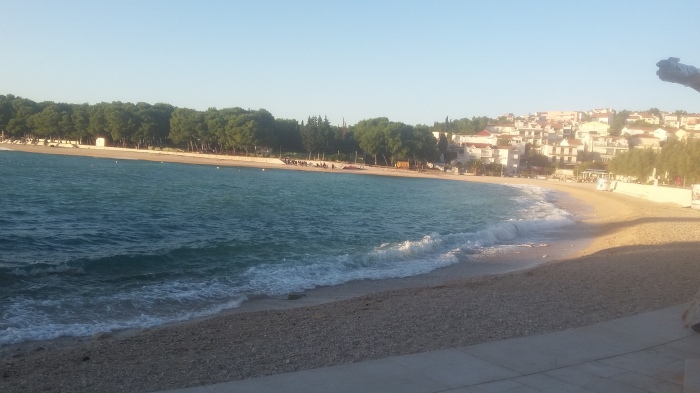 Got back to our hotel and I was literally unable to walk without hopping on my left foot. I laid in bed all night while my amazing husband took care of supper, and getting the kids into bed. Since the owners of where we alwere staying live right upstairs, I’d asked them if they had anything I could wrap my foot with. They did, which helped compress it. Thank goodness John knows what he is doing with that kind of stuff!! Day #1, and I was so scared I had already ruined our entire vacation! I had so much planned, I was sure my rushing out of the water was going to mess everything up!!

What an amazing day though. To say I was able to swim in a waterfall “pool” is still something I barely believe. The area was one of the nicest places I’d ever been to!!

Stay tuned to see if we had to stay in the hotel the rest of the trip, or was able to keep getting around…